Italy and Scotch whisky have had a long and passionate relationship, but now a new and increasingly diverse generation is discovering the joys of single malt, with mixology, whisky clubs and events to the fore. Marco Zucchetti reports. 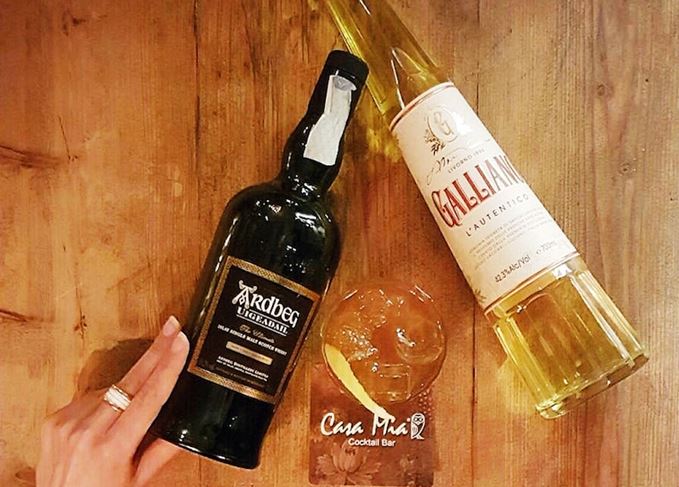 According to a vodka connoisseur like Josef Stalin, you can’t make a revolution with silk gloves. But, in the case of Italy, you can certainly make it with a shaker and a bartender’s apron.

This is because mixology is definitely the key to understanding what is now, somewhat pompously, called the Italian whisky renaissance. As Tom Bruce-Gardyne recently wrote, Italy was a single malt paradise during the 1970s, and now – after tough years of austerity and cheap drinking – it seems to have rediscovered its old passion for Scotch.

To investigate whether this is only a fad, or a deeper change in the Italian taste for alcoholic drinks that will transform Limoncello Country into a profitable market for Scottish distilleries, it’s worth travelling among whisky people: the best-placed individuals to know which way the malt wind is blowing south of the Alps.

Dewar’s owner Bacardi is even more optimistic, forecasting sales growth of 40% in the next five years. And Istat – the Italian National Institute of Statistics – has highlighted a cocktail boom among drinkers aged between 18 and 44.

It’s interesting to consider the growth of the two biggest whisky festivals in Milan and Rome. Milan Whisky Festival was the first, and this November the 13th edition is due to be held. Thanks to social media and its free entry policy, visitor numbers have leapt from 3,100 to 4,800 over the last four years.

‘There was a huge and positive generational turnover,’ say organisers Giuseppe Gervasio Dolci and Andrea Giannone, who had to move the stands into a larger space as a result. Of the 4,800 visitors last year, more than 3,000 were under 35 and more than 1,300 were women.

It’s the same trend for Spirit of Scotland, which became the Rome Whisky Festival last year. ‘We started down the road without very high hopes,’  reports Pino Perrone, the ‘soul’ of the event. ‘We were only a small group of enthusiasts. But now groups of curious younger people are more than common.’

This is the first great whisky revolution: the whisky youth movement. Jacopo Grosser and Giacomo Bombana have a stunning blog called whiskyfacile.com (Easy Whisky), with funny and precise reviews of malts, all with a link to a song.

The pair have witnessed the rising tide of the past few years: ‘At festivals, classes and tastings today you can find 20-year-old students with notebooks and a list of malts not-to-be-missed, and even girls,’ they say. ‘And they drink whisky. They’re no longer just nurses for drunken boyfriends.’

This has really impressed Nicola Riske, Macallan and Edrington brand ambassador. ‘Finally you can find in Italy a really cross-generational community of whisky fan,’ she says. ‘Young people are natural explorers of every interesting world, and it’s terrific to see how they’re experimenting with single malt.’

‘And this has been possible thanks to festivals spreading Scotch culture and thanks to independent bottlers, widening indefinitely the range of taste in a nation focused on food.’

Independent bottlers are not so easy to understand in a country where – as Perrone points out – blogs and websites are at an early stage and there’s no marketing, no product placement, and commercials on TV stopped with the 1990s cartoon of the sleeping cask of Macallan from importer Giovinetti.

Change is coming: Younger consumers, many of them women, are attracted to whisky

But something is changing even from this point of view. Puni, Ghibinet and Psenner started to distill their own Italian malt, and some Italian independent bottlers reached the highest quality level: Samaroli, Giorgio D’Ambrosio’s Bar Metrò, Max Righi’s Silver Seal, MWF bottlings, Valinch & Mallet and Wilson & Morgan (W&M). Bottles to drink, not only to collect.

Fabio Rossi created W&M in 1992, coming from a wine merchant family. He has been selecting casks for 26 years and bottling malts in all price ranges. Now his products reach bars and liquor stores, and they collect gold medals everywhere.

‘Single malt is the new trend for young Italians, especially peated ones,’ he says. ‘In youth culture, they replaced Jack Daniel’s, tattoos and Harley-Davidsons.

‘During the 1980s, Chivas Regal was fashionable; during the 1990s, even mint Keglevich vodka was fashionable. If now peated single malts like Smokehead or our Beathan are in style, and in pubs you can sell them easily... well, it’s an improvement in the collective taste!’

Italians felt in love with peat during the 1970s because of the exotic taste, so far removed from Mediterranean cuisine, and they’re still on their smoky honeymoon.

Now here’s another revolution: the pub and beer movement. As a wine-drinking nation, beer in Italy took its time to become as loved as red wine.

But, when craft beer became popular, pubs popped up everywhere. Pubs are for beer, beer is from barley, barley is the main ingredient of malt whisky: one thing leads to another.

Grosser and Bombana mark a further step: ‘Quality is the contemporary philosopher’s stone – everybody looks for it,’ they say. ‘Quality is not luxury, but craftsmanship, traceability and transparency.

‘Italians recognise it in wine and beer, and even in the whisky world they’re naturally inclined to prefer that type of product: single malts and small distilleries such as Springbank, Kilchoman or Benromach, rather than blends, which are perceived as more “industrial”.’

Quality is not a revolution, but a standard for Italy. Just ask the huge collector Mauro Leoni, known in the whisky community as Glen Maur, and the man chosen by the Scotch Malt Whisky Society (SMWS) to open its embassy in Milan in March 2018.

‘In Italy, Scotch fans are demanding – we need to arrange high-level tastings,’ Leoni says. ‘I called Edinburgh; our members here are not satisfied with entry-level bottlings.’

Ok, but what was the real spark for this boom? We reach the fourth and deeper revolution: the mixology movement. The Jerry Thomas Project in Rome, Mag and the 1930 speakeasy in Milan are only a few examples of the growing dynamism and vision of Italian bartenders.

Bourbon and rye led this revolution, but why not try to experiment and play with single malts too? That was the key to winning over younger consumers – and it opened up a whole new market.

‘Mixology and food pairing work very well because they push cultural buttons,’ Franco Gasparri from Diageo explains. ‘You can’t imagine a 20-year-old ordering a Lagavulin as his grandfather would do. No age statement (NAS) bottlings, affordable and easy to mix, supply this demand.’

It’s all about breaking taboos and abandoning the mythology of the lonely, brooding gentleman sipping whisky in his leather armchair. Mixology is changing the idea of single malt: not only a dignified spirit to drink neat, but also a ‘nightlife companion’.

Luigi Ferrario, owner of the Casa Mia cocktail bar in Milan, introduced a huge malt whisky list (more than 140 products) last year, and he now manages one of the most interesting whisky bars in the city.

Mixing it: The Jerry Thomas Project in Rome is part of Italy’s dynamic bar scene

He says: ‘Whisky’s taste used to scare people, like Tequila. Bourbon and blended Scotch were forerunners, and they helped customers to get familiar with classic drinks like the Whisky Sour, Boulevardier or Rob Roy.

‘Now single malt is in fashion, both neat and in mixology: a single customer finished a bottle of Macallan 22 Year Old, a dram a day; our cocktail The King’s Shelter, made with Ardbeg Uigeadail, is quite expensive (€18), but it has been very well-received; and a lot of people are asking for “peated twists” on traditional drinks like the Old Fashioned. We even use vaporised peated whisky in a Martini.’

By the end of the journey, you can feel the optimism blowing through the whole Italian whisky world. Well, maybe not quite everywhere. Distribution concerns persist, with Bruichladdich leaving Branca and surprisingly choosing Molinari, a sambuca specialist.

Furthermore, many people still prefer tumbler glasses to Glencairn; Mirko Turconi (best Italian bartender in Diageo World Class 2017, from Piano 35 in Turin) says some customers still order ‘the most expensive malt’, so whisky here is often a question of status rather than knowledge; and some companies complain about sales falling short of projections.

So Italy is not France: it’s not turning into the next golden goose for the Scotch whisky industry. Nonetheless, something is changing.

‘We’re all seeking after interesting drinks,’ says Juliette Buchan in conclusion, ‘and Scotch with its history and charm is one of the most interesting.’

That’s why there’s no point in wasting any time: if Italy is really going to fall in love with Scotch whisky, then getting to know it at a young age is not only a benefit, but a duty.