Ostensibly a wine-drinking nation – with a splash of grappa or Campari on the side – Italy became the world’s biggest consumer of single malt Scotch during the 1970s. How did that come about – and can Scotch scale those heights again in the future? Tom Bruce-Gardyne reports. 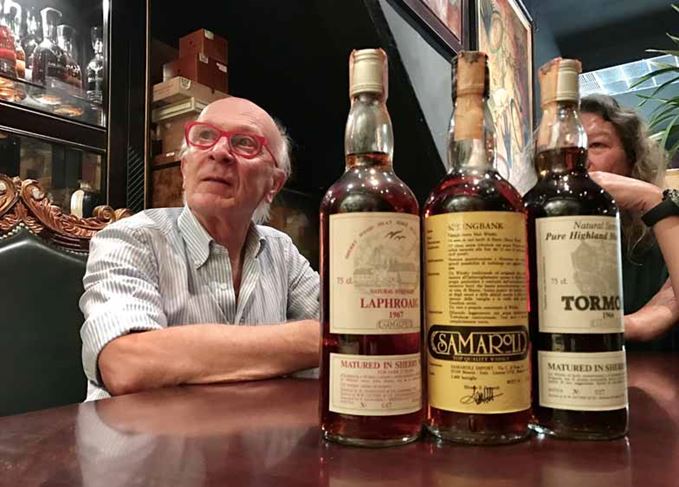 Legendary bottler: The late Silvano Samaroli was a driving force for malts in Italy

Travel back to the 1970s and order a dram in one of Glasgow’s backstreet boozers. The publican will turn his back, fiddle with the optics and return with a mean-looking blend splashed in a tumbler – perfect for chasing a pint of ‘heavy’.

But, had you time-travelled to Rome, the experience would have been rather different. In his book Whisky, Piero Accolti pictures a barman there placing ‘three chips of ice into a glass before adding a golden, undulating stream, sprayed with soda’.

No contest in terms of glamour or appreciation of Scotland’s native spirit. While the Scots were succumbing to the dubious charms of vodka, Italy became the third-biggest importer of Scotch in the mid-1970s, and number one for malts. Quite how this wine-drinking culture became so hooked on whisky after the Second World War is a fascinating and – outside Italy, at least – untold story.

It begins with a slow build-up in demand for a luxury that first appeared in the late 19th century, when whisky was imported by Genoese firms like Wax & Vitale, which was appointed Johnnie Walker’s agent in 1906.

Some 20 years earlier, a local Scottish newspaper spotted a consignment of Glenmorangie bound for Rome, and wondered if the Pope was partial to a drop of ‘the dew of Easter Ross’.

However, globe-trotting whisky barons like Tommy Dewar were looking further afield, to the US and far-flung outposts of the British Empire. In Italy, whisky imports dried up under Mussolini, and people were left with counterfeit brands like ‘Black Horse’ and ‘Mister Walker’. In Single Malt Whisky – an Italian Passion, Umberto Angeloni claims Italians were exporting their own ‘Whisky Italiano’ and ‘Whischy Medicinal’ to the US during Prohibition.

Whisky was reintroduced to Italy at the end of the Second Word War by Allied troops. ‘The second big step was [Edoardo] Giaccone, who opened his whisky shop in Salò in 1959,’ says whisky writer Davide Terziotti. This Whiskyteca on the shores of Lake Garda was phenomenally successful and spawned at least six others, according to Diego Sandrin of Lion’s Whisky.

Glamourised on film, and by the stars who thronged the bars along Rome’s Via Veneto, Scotch began to take off. With Italy’s booming post-war economy, it was becoming ever more affordable. For a few thousand lire you might not get to the Via Veneto, but you could pour yourself a drop of La Dolce Vita and demonstrate that you’d arrived.

By 1979, imports of Scotch had reached 40m bottles, although consumption may have been even more, given the amount of parallel trading. In Scotch Whisky: A Liquid History, Charlie MacLean describes a Johnnie Walker salesman picking out fakes and bottles labelled for other markets in Rome. A bottle of Black Label was described as ‘completely false… tasted like scented liqueur’.

But what really set Italy apart was its love affair with single malts. In pole position was Glen Grant five-year-old, which Armando Giovinetti began importing after a first visit to the distillery in 1961.

One imagines the Scots thought he was mad trying to flog malt whisky to the Italians of all people. ‘Wha’s wrong wi’ blends?’ they might have grumbled but, after an initial 100-case order, Giovinetti was back for more. He built Glen Grant in the five-star hotels, before entering the mainstream via endless television ads. Later, he gave Macallan seven-year-old the same big brand treatment.

Priced like a blend, one wonders how many realised Glen Grant was a single malt – or what that actually meant. This, however, was not the case with Giaccone’s customers, or with the growing band of specialist importers who supplied his Whiskyteca and bars like Giorgio d’Ambrosio’s Bar Metrò in Milan.

In 1968, the late Silvano Samaroli began bottling whisky, and with single cask and cask strength whiskies ‘tried to change the paradigm of single malts’, says Terziotti. Before long there were other Italian bottlers.

There was a thirst for knowledge and a need to supply the whisky bars with an ever-wider range. And yet ‘big whisky’ seemed pretty uninterested, as Wallace Milroy discovered when opening his famous Soho whisky shop.

As he said: ‘The old Distillers Company simply didn’t want single malts to be known.’ The solution, as Italy’s whisky entrepreneurs soon learnt, was to seek out the Scottish indie bottlers. It was a marriage made in heaven.

While Samaroli worked with Cadenhead, others went straight to Gordon & MacPhail, whose boss, George Urquhart, repaid the compliment with an annual six-week pilgrimage to Italy in a left-hand-drive Lancia bought specially for the purpose.

In 1983, his wife Peggy and 12-year-old grandson, Stephen Rankin, came too. As they stopped in Milan, Rimini and Rome, Rankin, now a company director, recalls ‘the huge respect my grandfather was held in. He was treated like a king’.

In Rimini, Intertrade (later High Spirits) specialised in beautifully-labelled single cask bottlings. As its boss Nadi Fiori told Terziotti: ‘The atmosphere was extremely simple. Scots are open and generous in their human relations… and at that time it was also very easy to get basic casks, something that now looks like mission impossible. I have to thank the Urquhart family, they were my key to many doors.’

Importer Rino Mainardi recalls: ‘My philosophy was to buy one or two casks, but I was determined to choose them. I wanted to taste every cask in order to pick the best.’ In 1979 he hired a bus for a week to take 25 clients around Scotland, visiting distilleries and bottlers, in what became an annual trip.

With a different group each time, everything was tasted blind to decide what to bottle, and everything was paid for by Mainardi, but it was worth the investment. The bottles quickly sold out, and a fresh band of disciples was out preaching the gospel of single malts.

Clearly, whatever Sydney Smith said about ‘eating pâté de foie gras to the sound of trumpets’, heaven was being a whisky drinker in Italy in the 1970s, although many bottles were being collected rather than drunk.

Italy, according to Massimo Righi of Whisky Antique, ‘is a nation of collectors. We collect everything, and the appeal of whisky is its history, quality and beautiful labels’. Yet there were other reasons too. ‘You know it was a very unstable financial time here in the 1970s, and people started to buy collectibles, instead of putting money in the bank,’ says Sandrin.

Collectors like Giuseppe Begnoni progressed from miniatures to bottles to, in his case, buying the world’s biggest whisky collection, that of Edoardo Giaccone, who died in 1996. You can drool over its treasures on www.whiskyparadise.com, and a few years ago you could even drink some of it in the bar beneath the Scotch Malt Whisky Society in Leith.

I once met Begnoni there to compare 10-year-old Glenlivets bottled in Italy in the 1970s with today’s equivalent. The Italians were infinitely better – a testament to the skill of the indie bottlers and their freedom to cherry-pick the best casks.

By the 1990s, Italy’s love of Scotch was starting to fade. Glen Grant was no longer on TV, the palloncino, or breathalyser, discouraged the drinking of superalcolici in the on-trade, and over-exposure in the supermarkets had tarnished some brands.

Yet maybe it was simply a generational shift away from an ‘old man’s drink’ like whisky, coupled with a stagnating economy under Berlusconi when only Zimbabwe and Haiti enjoyed worse GDP growth.

Spirits consumption has plummeted, while trendy brands like Aperol (and its signature Spritz) offer a softer buzz for a lot less cash. Nowadays most Italians would baulk at the price of a standard Macallan in a bar, let alone a 35-year-old.

Nadi Fiori: The Intertrade boss is grateful for the help of the Urquhart family (Photo: Fabio Petroni/Simon P Murat)

The pioneering Italian importers had played a pivotal role and, as Charlie MacLean wrote in his Liquid History: ‘Wise brand owners gave them a free hand – it was impossible for outsiders to comprehend the complexities of the market place.’ But it seems that wisdom was lost as agents were fired and replaced with Italian subsidiaries.

‘Now the attitude of the big groups is: “If you want a case of Ardbeg, you’ve got to take four cases of Champagne,”’ says Terziotti. Meanwhile, pricing structures suggest a lack of interest in this once great market.

When a big producer told Massimo Righi that Italy wasn’t an important market any more, he replied: ‘Well, you may not sell much in Italy, but you still sell a lot to Italians. They just buy in England or France.’

The Italian love of collectible malts is obvious from the secondary market. ‘If you go to a whisky bar in Japan and want to drink an old whisky, or you look at the online whisky auctions, 90% of the bottles come from Italy,’ says Terziotti. The passion may have cooled, but the country is still just in the top 10 malt markets, and still drinks more Scotch per head than the US.

There are also signs of a resurgence. At last weekend’s Milan Whisky Festival, where Terziotti was launching his new book, My Name is Whisky, 7,000 visitors are expected, compared to only 600 a decade ago. The Scotch whisky industry, perhaps, should take note.

With thanks to Davide Terziotti for his assistance, and for the use of images from his new book, My Name is Whisky.