As the days grow longer and the temperature rises, there’s no better way to embrace the sun’s rays than hitting an outdoor oasis with city views to boot. Melita Kiely rounds up some of the best rooftop bars to enjoy a dram or two this summer. 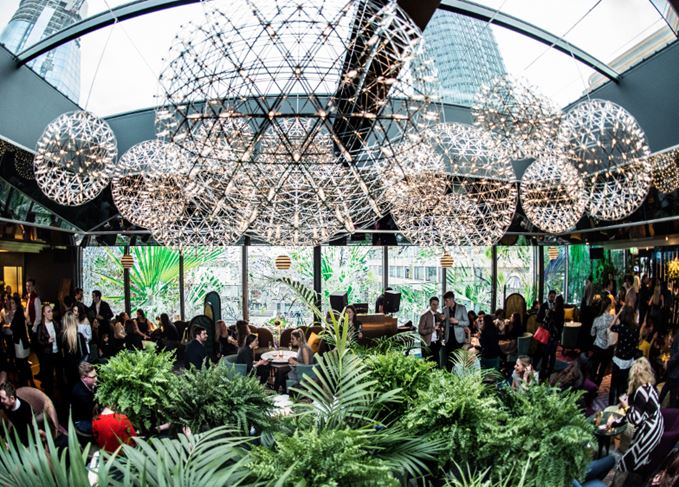 Rooftop vibes: Take your whisky al fresco this summer at one of these rooftop bars

Rooftop imbibing has become a must-do summer activity over recent years, as city-dwellers go in search of delicious drams and cocktails with sky-high city views.

Though the weather may be unpredictable at times (particularly if you live in the UK), there are myriad outdoor options, come rain or shine.

Whether you’re looking for casual after-work drinks while soaking up the last of the day’s rays, or a more high-end affair to ring in the weekend, we’ve compiled a list of some of the best rooftop watering holes, from the US to London and Singapore.

If you’re lusting after skyline views of bustling Bangkok, then look no further than what claims to be the world’s highest outdoor whisky bar. Alfresco 64 – A Chivas Bar sits 800ft above the city streets on the 64th floor of a skyscraper, and is part of The Dome at Lebua – a group of restaurants and bars above Lebua hotels. With views overlooking the Chao Phraya River, the outdoor area emulates the design of a luxury yacht. There’s a vast array of whiskies on offer, and there’s also the Chivas Regal Exclusive Lebua Blend to sample, created especially for the bar by the Chivas Regal blending team. Each whisky used in the blend was distilled in 1985 or earlier, and matured in a range of casks, including American oak, before being married and matured in a first-fill Sherry butt for nine years.

Head to Chicago’s Gold Coast district and up to the outdoor terrace of Drumbar – part of the Scotch Malt Whisky Society (SMWS). There are cocktails aplenty to be enjoyed while overlooking Lake Michigan and the Hancock building, from classic recipes to original concoctions. Or if you’d rather drink your whisky straight-up, there are more than 100 different expressions to choose from. Just take your pick: Irish, American, Canadian, Scotch – and exclusive SMWS bottlings too.

Take in panoramic views of St Paul’s Cathedral, the Gherkin and the Walkie-Talkie come rain or shine at Coq d’Argent’s Bar & Grill terrace. Though situated in the heart of the City, the bar takes its cocktail inspiration from around the world, including 1920s Paris. Whisky-based serves include the Cherry Thistle, made with Dalmore 12-year-old, Maraschino cherry, cherry brandy, Campari and lemon juice. And the whiskies are sure to impress as well, with dozens of single malts from distilleries all over Scotland, plus a smattering of bottlings from Japan, the US and Ireland for good measure.

Creative bistro cuisine, carefully crafted cocktails and stunning urban views of New York – what more could you want from a rooftop bar? Oh, and did we mention that Bar SixtyFive is located on the 65th floor of the Rockefeller Center? The addition to the famous Rainbow Room first opened its doors in 2015, and has grown to become a highly sought-after rooftop escape. Cocktails switch between classic and contemporary, such as the Blood and Sand made with Isle of Skye Scotch, Carpano Antica, orange juice and Cherry Heering Liqueur, while the whisky menu is split between Scotch, Bourbon and rye. Make sure you make a reservation in good time, though – high demand means outdoor seating can’t always be guaranteed, and there’s a US$65 minimum spending policy per person for a terrace spot.

London escapism at its finest – leave the stress and strain of the City behind as you sip cocktails riverside, while the sun sets over the Thames, with St Paul’s Cathedral sitting opposite. Mixed drinks include the Improved Whisky Cobbler, made with Clynelish 14-year-old, La Ina Fino Sherry, maple syrup, lemon and orange. Plus, the bar’s extensive whisky list will also leave little to be desired, covering all bases with blended and single malt Scotch whisky offerings, and a selection of Japanese, Irish and American whiskies.

New York City drinking doesn’t get much more idyllic than this, with a lounge adorned with wood and brass details accompanied by an outdoor terrace with sweeping views over Central Park. Located in the upscale Viceroy Central Park Hotel, the drinks menu has a selection of cocktails, from classics to house serves and a ‘reserve list’, which features, among others, a Macallan Blood and Sand, made with Macallan 12-year-old, Dolin Rouge, Cherry Heering and orange juice. If you’re looking for Scotch, pick from blends/blended malts including Monkey Shoulder and Chivas Regal, or single malts ranging from Balvenie, Dalwhinnie and Oban. There’s also a choice of Bourbon and American rye whiskeys if you fancy going native.

Gallery & Bar at One Altitude, Singapore

Provided you’re not afraid of heights, you’ll find some of the best views and beverages Singapore has to offer at One Altitude’s rooftop Gallery & Bar. With claims to being the world’s highest (in terms of altitude) al fresco bar at 282m (925ft) above sea level, views of the Singapore skyline don’t come much better than this. You’ll find Scotch whiskies ranging from Laphroaig 10-year-old, Dewar’s 12-year-old and Johnnie Walker Green Label, to Benromach 21-year-old and Ardbeg 32-year-old.

The Next Whisky Bar, Washington DC

Though the cocktail menu is short and sweet, the whisky listing at The Next Whisky Bar is anything but. Starting with a selection of limited and rare expressions, such as William Grant & Sons Ghosted Reserve 26-year-old and Tomintoul Reserve 37, the whiskies continue for several pages, covering everything from the US to Scotland and Japan. The highly-trained staff are kitted out in uniforms created by Mad Men costume designer Janie Bryant, while the indoor 1970s-chic lounge is decorated with 2,500 custom whisky bottles. And if you’re partial to a cigar with your dram, the bar also offers a rotating selection to be enjoyed at your leisure on the terrace.