The Royal Family’s love of Scotch

For nearly 200 years, Scotch whisky has enjoyed the patronage of the British Royal Family – from King George IV demanding illegal single malt to Kate and William bottling their own Glenturret. With a new Royal baby on the way, Giles Milton reports on how Scotch came to be so close to the throne. 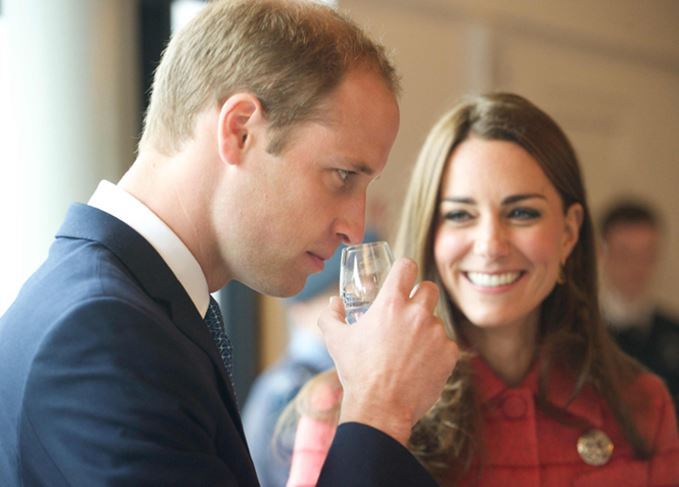 Royal visit: The Duke and Duchess of Cambridge at Glenturret distillery

In 1822, Scotch whisky was a lawless, edgy business – a world of illicit stills, smugglers and the liberal use of firearms. Distillation was so costly that it was easier to take a chance, hide in the hills and make whisky illegally.

But monarchs don’t take notice of such niceties. Particularly the ‘portly Hanoverian’, King George IV. When he made his famous state visit to Edinburgh in 1822, he entrusted one Sir Walter Scott to lay on all the ‘entertainment’, including copious amounts of the most sought-after Scotch of the day, Glenlivet (the generic name given at the time to illicit whisky from Southern Speyside). The fact that it wasn’t strictly legal doesn’t seem to have bothered him much.

How significant was the impact of that notorious visit? A year later, the Excise Act was passed by Parliament, effectively making the production of Scotch whisky profitable. Within another year, Glenlivet founder George Smith had gone legit; within a decade, smuggling had all but died out, and the foundations were laid for today’s Scotch whisky industry.

Lawless land: The braes of Glenlivet were rife with smugglers in the early 19th century

Royal Brackla: ‘The King’s Own Whisky’

Brackla in the Highlands achieved the landmark of being the first Scotch distillery issued with a Royal Warrant. Its owner, Captain William Fraser, had licensed the operation in 1817, but was not a popular man. Not overly keen on paying his taxes, he was described as ‘haughty, imperious and tyrannical’ by one exciseman who had the misfortune to be placed on Brackla duty.

Fraser was, however, a determined and opportunistic entrepreneur and, in partnership with London-based wine merchant Henry Brett, shipped consignments of whisky down to the capital – making it among the city’s most popular drinks.

Whether it was this success in London, or friends in high places from his time in His Majesty’s Armed Forces, in 1835 Fraser was able to obtain permission from King William IV to ‘use the Royal Arms on everything connected with his distillery, as a mark of approbation for the complete success which has attended his efforts to produce Highland whisky by licensed distillation’.

To a self-promoter like Fraser, a warrant was an opportunity to raise the profile and produce of his distillery. Immediately rechristened Royal Brackla, his bottlings were soon being advertised in London newspapers as ‘The King’s Own Whisky’. Shortly after her accession to the throne in 1837, Queen Victoria renewed the warrant to confirm it as one of Britain’s best-known whiskies.

Glenury Royal: ‘Distiller to her Majesty’

Captain Robert Barclay Allardice (1779-1854) was a remarkable man. Born in Stonehaven, Aberdeenshire, he was a Cambridge graduate, boxer, champion ‘pedestrian’ (long-distance walking), Napoleonic war veteran and successful distiller with Glenury distillery on the north bank of the River Cowie.

Among his other claims to fame, Barclay was also a friend to royalty – specifically whisky fan King William IV – and he used the friendship to successfully petition for the right to add a ‘Royal’ suffix to Glenury.

Shortly after King William IV’s death in 1837, this royal endorsement was cemented when Glenury Royal was named the official ‘Distiller to Her Majesty’ by the newly-crowned Queen Victoria, who became something of a whisky fan herself.

This caused a royal rumpus, as Captain William Fraser – that old charmer of Royal Brackla fame – took exception to the suggestion that Glenury Royal might be the first distillery anointed by the new monarch, claiming that she had renewed his Royal Warrant months earlier.

This battle of wills did not go unnoticed by other distillers. In 1848, ‘Long’ John McDonald of Ben Nevis sent a cask of whisky to the Royal Family. Alas, this was not sufficient to receive a precious warrant.

Queen Victoria not only did wonders for Scotch whisky, but for Scotland itself. Over several summer holidays in the 1840s, she made it fashionable for the wealthier classes of England to holiday north of the border.

She first visited with her husband Prince Albert in 1842 and, the following year, awarded a Royal Warrant to the Aberdeen-based merchant that would become Chivas Brothers to supply her luxury food.

Chivas Brothers dates back to 1801, when John Forrest established a wine and grocery merchant at 47 Castle Street in Aberdeen. James Chivas joined the business in 1838, and was later joined by brother John.

It was during the 1860s their first regally-titled blend, Royal Strathythan, was released. By 1895, following the deaths of James, John and James’ oldest son Alexander, Chivas fell under the control of Alexander Smith and master blender Charles Stuart Howard, who placed a greater emphasis on whisky.

In 1909, Chivas Regal emerged – in reference to the Royal Warrant (pictured above) renewed by Queen Victoria in 1884. In time, Chivas extended the royal prefix to other whiskies, including Royal Salute and Royal Citation.

The Famous Grouse: born of a royal visit

While The Famous Grouse may not have a regal name, it carries a Royal Warrant, dating back to Queen Victoria’s early trips to Scotland. In 1842, she visited Scone Palace in Perth, and Matthew Gloag, who ran a wine and grocery store in Atholl Street, was invited to cater for the event.

The business grew quickly – not least from the excitement south of the border for all things Scottish – and, in 1897, Gloag’s great-nephew, also Matthew, launched Grouse Brand whisky, along with a cheaper blend called The Famous Grouse.

The Famous Grouse was awarded a Royal Warrant by HRH Queen Elizabeth II in 1984, and the Royal Family continues to support the brand, with the Earl and Countess of Strathearn – William and Kate – visiting the spiritual home of Grouse, Glenturret distillery, in 2014 to bottle their own malt.

Queen Victoria’s relationship with whisky in the early years of her reign consisted mainly of granting warrants but, in 1848, the purchase of the Balmoral estate in Deeside – which subsequently became Royal Deeside – introduced her to John Begg of Lochnagar distillery.

Lochnagar was built in 1843, across the River Dee from Balmoral, and upon hearing about his new and upwardly mobile neighbours, Begg invited Queen Victoria and Prince Albert to visit for what is claimed to be the ‘first’ distillery tour (by a reigning head of the British Empire, at least).

The day after his invitation, Begg was perhaps slightly surprised to find the Queen, Prince Albert and three children on his doorstep. Touring his distillery, the family were to take a dram of Begg’s make, enjoying it so much that it was quickly awarded a warrant, becoming the third Royal distillery.

Queen Victoria became a fan of Scotch, taking it with water, soda, claret (!) or in tea. Between 1893 and 1895, she awarded warrants to John Dewar & Sons and George Ballantine & Son, but when her fondness for imbibing became widely known in 1895, it caused a minor social uproar from the puritanical Victorian public.

Today the world’s number one whisky brand and sold in more than 180 countries, Johnnie Walker was first registered as a trademark in 1877, and had to wait until 1934 for a Royal Warrant, from King George V – two years before his death.

To commemorate the 75th anniversary of this landmark, Johnnie Walker owner Diageo created the King George V blend, made from distilleries operating during the King’s 25-year reign, and carrying the Queen's Royal seal on each bottle.

Laphroaig and Ballindalloch: the Duke's drams

The Duke of Rothesay – HRH Prince Charles to non-Scots – enjoys a single malt from time to time. He opened Ballindalloch single estate distillery in 2015 and has visited The Famous Grouse experience at Glenturret.

His favourite dram, though, is reputedly Laphroaig 15 Year Old and, in 1994, Prince Charles issued the Islay operation with a Royal Warrant – the first and only distillery so recognised by the Prince of Wales. Laphroaig in turn celebrated by releasing a 10-year-old single malt, aptly named ‘Royal Warrant’.

Prince Charles – who also carries the title ‘Lord of the Isles’ – was to return to Laphroaig in 2008 as part of his 60th birthday celebrations, and again in 2015 to celebrate the 200th anniversaries of Laphroaig and Ardbeg distilleries, taking the chance to shovel some peat at the same time.