Blended malts return to the spotlight

Known for years as ‘vatted malts’, they’re a style that almost vanished from the whisky universe thanks to years in the doldrums. Now blended malts are back in fashion, as Iain Russell reports. 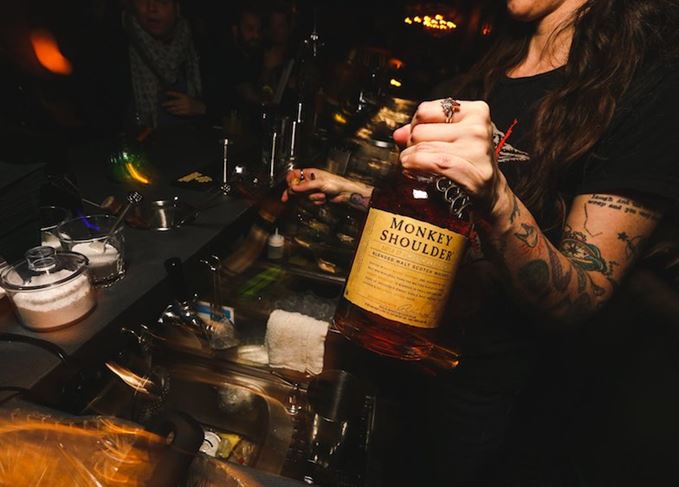 The growing success of Monkey Shoulder, named by Drinks International as the ‘Top Trending Brand of Scotch’ in bars worldwide, has encouraged the launch of a number of new blended malt whisky brands recently, including Chivas Regal Ultis and Naked Grouse (previously a blend), as well as a first foray into the category from Buchanan’s.

The revival of the category is long overdue; ‘vatted’ malts (as they were commonly known until the legally-defined term ‘blended malt Scotch whisky’ was introduced in 2009) almost disappeared from the whisky market for many decades. Yet they have a long and illustrious, if little-known, place in the history of Scotch whisky.

The practice of vatting or blending single malt whiskies from different distilleries goes back to the earliest days of the whisky trade. Whisky merchants might vat single malts to enhance or tone down a particularly prominent flavour characteristic. A cask sitting in a pub or shop was often topped up with whatever single malt was available.

And it was common for wealthy gentlemen to refill the casks in their cellars with a mixture of single malts to create the flavours they enjoyed – as late as 1920, Prof George Saintsbury sang the praises of his own cask, containing a mixture of Clynelish, The Glenlivet, Glen Grant, Talisker and Islay malts.

The development of the continuous still in the mid-19th century provided Scottish wine and spirits merchants with an ample supply of relatively cheap neutral or near-neutral grain spirit. This could be blended with the more flavoursome single malts to create consistent whiskies at lower prices.

New venture: Chivas Regal moved into blended malts with the launch of Ultis in 2016

The big Lowland blending firms prospered from the creation of some of the world’s greatest whisky brands, such as Dewar’s, Johnnie Walker and Buchanan’s. Blended Scotch came to dominate the whisky markets of the world.

Yet, while the trade papers carried stories of trains bringing thousands of gallons of single malts from the Scottish Highlands to the blending houses in southern cities, there were no reports of trains heading north with cargoes of grain whisky, or Lowland malts, for the blenders in Aberdeen, Inverness and the small towns beyond. The reason was simple – they weren’t welcome there.

An important reason for that was economics. The main attraction of grain whisky was its price – but there were no continuous stills in the Highlands, and the cost of shipping it from the southern distilleries negated that perceived advantage.

The second reason related to drinking culture. Northern Scots had expressed disdain for southern whiskies since the beginning of the century, disliking the fiery products of the rapid distillation techniques developed by Lowland distillers to reduce their excise tax liability.

There was a general suspicion of grain spirits too, reinforced by the perceived injustice of the Royal Commission’s ruling in the ‘What is Whisky’ case in 1909. For perhaps the vast preponderance of northern tipplers, a bottle of Scotch should contain Highland malt whisky from a single distillery, or from several distilleries, judiciously blended.

‘Malt Perfection’: Buchanan’s is another whisky name to move into the sphere of blended malts

John Gibson was a typical Inverness merchant. In adverts, he warned his customers that the great majority of blends were ‘composed almost entirely of Raw Grain Spirit’, and he boasted proudly that he stocked ‘no raw grain or Lowland malt whisky’. Meanwhile, John Mitchell of The Royal Athenaeum in Aberdeen described himself as ‘An All Malt Whisky Dealer’.

And another Aberdeen wine and spirits merchant made its views quite clear in notices to customers:

‘Chivas Brothers beg to invite attention to their various blends of North Country Highland Whisky which have been selected from the best named distilleries, matured in Sherry casks, and stored in HM Bonds. These blends are warranted to be entirely free from any mixture of what is known in the trade as South Malt or Raw Grain Whisky, which is made on quite a different principle from North Country Whisky.

‘The latter is distilled from the best barley and regularly malted while the former is made on a principle which produces a larger quantity of Spirit at much less expense, the original cost to the distiller being one half that of the North Country Whisky and the difference in quality is in proportion.

‘Whisky connoisseurs would do well to inform themselves on this point, as many people think the fact of Whisky coming from Scotland is a sufficient guarantee of its excellence which is very far from being the case.’

Born again: Compass Box released The Last Vatted Malt to coincide with the category’s change of name in 2011

Blended malts made a tentative comeback on the back of the single malts revival in the 1980s, with brands such as IDV’s The Strathspey (with its tagline, ‘Beyond the Single Malt’). In the 1990s, Chivas introduced The Century of Malts to great fanfare and excellent reviews but, despite strong marketing support, it failed to pique the interest of consumers, who couldn’t get their heads around the concept of a third category of Scotch whisky.

Johnnie Walker Pure Malt (renamed Green Label in 2004) has also received enthusiastic reviews, but it has not always sat comfortably in the Johnnie Walker portfolio and was discontinued (except in Taiwan) from 2012, before being reintroduced to the main range four years later.

Compass Box helped revive whisky aficionados’ interest in blended malts in the early 2000s with expressions such as The Spice Tree and Eleuthera, and Whyte & Mackay did the same with Shackleton. But it is William Grant & Sons which has injected real excitement to the category. The company did so by taking it along a new path.

Monkey Shoulder was introduced in 2005 and developed, patiently, as a ‘fun’ and quirky brand in the on-trade. By 2018, Drinks International declared it was the most popular Scotch whisky in the world’s leading bars, overtaking Johnnie Walker.

Who would have guessed, even a few years ago, that a Scotch from a category once deemed to be dying and beyond resuscitation would take such a title from the world’s leading whisky brand?