Gordon & MacPhail: past, present and future

It’s a time of great change at Gordon & MacPhail, the Elgin-based independent bottler that can trace its history back 123 years. But, even as the company streamlines its huge number of whisky ranges, the essential philosophy underpinning the business remains unaltered. Dave Broom reports. 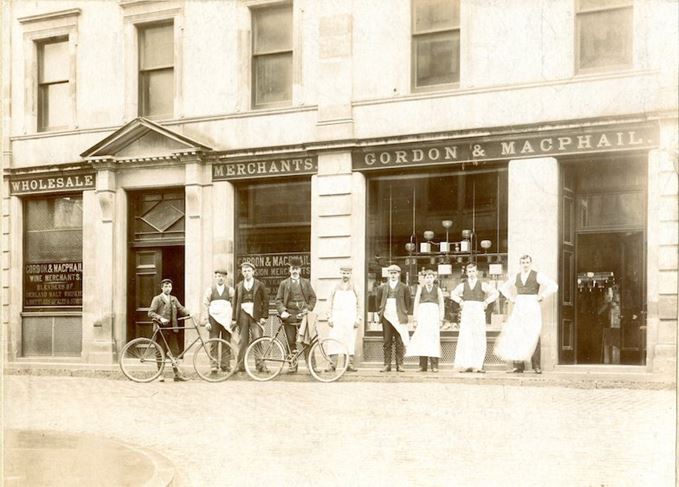 Then…: Gordon & MacPhail opened its grocery business in South Street, Elgin in May 1895

‘I suppose it’s our hoarding nature.’ A smile spreads across Stuart Urquhart’s face as I gape at the selection of casks at Gordon & MacPhail’s Elgin warehouse. Seemingly endless ranks of them, containing whisky from almost every distillery in Scotland.

In front of me, a brace of ancient Glenlivets, next to them Glen Grants; I pause beside a venerable Mortlach and spot another one behind. All of them go back decades: ’60s, ’50s, further. No other firm has such range in such depth.

Anyone interested in whisky will have encountered a Gordon & MacPhail (G&M) bottling at some stage, but maybe not recognised it as such. Just as you get (happily) lost in the warehouse with its endless possibilities, so the consumer could become baffled by the firm’s many ranges.

‘It took me three years to understand what they all were,’ admits Ian Chapman, the firm’s marketing director. ‘I think of the portfolio as being like a grand stately home. It’s been around for 123 years and, over the years, bits have been added on. Fitting whiskies in was a bit like asking: “Which room has a spare bed?” Now we’ve taken it back to the four walls.’

That has meant trimming the previous 16 ranges down to five, ‘so you can now go from room to room and not get lost!’ as Chapman puts it.

…And now: The Urquhart family in front of the modern Gordon & MacPhail premises

The welcome at the new front door is the ‘Discovery’ range, a permanent selection comprising Glenrothes, Miltonduff and Bunnahabhain, all aged in ex-Sherry; Tormore, Balblair and Tomatin in ex-Bourbon; and two smoky expressions: Caol Ila and Ledaig.

All are bottled at 43%, and are between 10 and 13 years of age, making a selection of what international sales manager Richard Urquhart calls ‘everyday whisky to enjoy at £50’.

The Distillery Labels range has been retained and, while the iconic label designs remain, the new bottle shape is the same as for Discovery and Connoisseur’s Choice, and is more prominently branded as being from G&M.

It consists of: Ardmore, Glenburgie, Glen Grant, The Glenlivet, Glentauchers, Linkwood (at 15 and 25 years old), Longmorn, Miltonduff, Mortlach (at the same ages as Linkwood), Scapa and Strathisla.

‘These were well-known labels,’ Richard explains, ‘but it was difficult to tell that they were from us. Now you can tell that this Mortlach 15-year-old is a G&M product, it’s easier to get our message across.’

The new-look Connoisseur’s Choice sits at the heart of the new portfolio. Now mostly comprising single cask releases, the selection has been sub-divided into cask-strength bottlings, finishes and some batches (bottled at 46%).

Prices start at £75 and rise up to £500 for whiskies of 30 years and above. Further up the rarity scale will sit Private Collection (which will be relaunched this autumn) and the Generations ranges.

Prize casks: The scale and depth of G&M’s whisky inventory is something to behold

It’s a radical shift for what has been thought of as an ultra-traditional firm. ‘It was time to turn onto a new page,’ says managing director Ewen Mackintosh, ‘take best of where we came from and simplify it. We want to be brand owners, we want people to be buying G&M whisky.’

He also sees the move as giving greater security moving forward. ‘Many of the old arrangements were done with a handshake, some going back to Mr George [Urquhart] or his father helping distillers who were in need of cash by buying casks.’ It might be a charming reminder of the old days, but today’s industry is somewhat harder-nosed.

‘We don’t control our own destiny,’ he continues. ‘What happens if the person we’ve done business with at a large company leaves, or the marketing director changes and decides to start bottling something we had? Any change of direction on their part can affect us and the supply.

‘We have Benromach and it’s no secret that we want a second distillery, and we’re having a look at that as a project. The aim is to become a portfolio company and not be so reliant on the G&M whisky business.

‘The question has been what does the family do for future generations? It is being in charge of your own destiny and that means establishing G&M as the brand, and telling our story.’

That story is a fascinating one, how in 1895 a precocious young man called John Urquhart joined a high-class grocer, ended up owning it and began to specialise in single malt whisky, filling new make into his own casks.

Self-determining: G&M MD Ewen Mackintosh wants the company to govern its own destiny

Nothing has changed in that respect. Unlike other bottlers, G&M still controls its whisky from new make to bottling. Explaining that also necessitates more self-examination.

‘The question is how we distance ourselves from what we class as armchair bottlers who buy casks from brokers,’ says Mackintosh. ‘That whisky is there because it’s surplus to requirements. There will be gems in there, but there’s no control or consistency.

‘If you fill into your own casks, you can decide that whisky’s fate from day one. We have the ability to consistently get that because we can control it from the moment we stick it in the cask, and that has a significant impact on quality.’

Does that also mean there is a G&M style? If they held a blind tasting of the same distillery’s whiskies bottled by G&M, Cadenhead, and Signatory, I ask Richard Urquhart, what would identify the G&M bottling?

‘The balance, the richness, the cask influence,’ he responds. ‘It’s that balance of maturation…’ He grins. ‘And our bottles now weigh more!’

That in turn is a reflection of a cask policy which would shame many distillers. Sixty-five percent of the stock is filled into first- or second-fill Sherry butts or hogsheads, sourced from three Sherry suppliers and only seasoned with Sherry from within the DO (Denominación de Origen) triangle (some other firms will use ex-Montilla wine casks).

Quality control: All G&M casks are rigorously sampled and assessed for future potential

‘This will be the last year of using ex-bodega casks,’ explains Stuart Urquhart, whose grand title of associate director, whisky supply, basically means blender. ‘From now, all casks will have been heavily toasted, seasoned to our spec, and we’ll use a higher percentage of American than European oak.’

Once again, control lies at the heart of the the thinking. ‘The whisky will spend its first decade with the distiller,’ Stuart explains. ‘When we get it here, we assess and grade on a 1-10 scale.

‘Anything which is above eight will be kept for long-term ageing; five to eight will be used in a bottling; a four will need more time; and anything lower will be racked into new casks. Maturation is key to what we do. Imagine filling something that no-one wanted.’

This process is revealed to me the following day when, at the firm’s store, G&M’s director of prestige Stephen Rankin takes me through a tasting of whiskies from the sample room at the point when that first decision was made.

It is a revelatory experience, culminating in two Glenlivets from sister casks filled in 1943 and sampled in 1967. The elegant cask 120 showed rose petal fragrance and touches of tobacco, while 121 had more power and richness, mixing waxiness with some honeyed pecan and mint.

Although both were in their mid-20s by then, both could clearly go on for longer… and they did. Cask 120 was bottled in the 1980s, while its companion stayed in cask until it was bottled last October.

The tasting had come after Rankin had taken me on a journey through time, from the shop’s basement where the casks used to be unloaded, emptied and bottled, to the store itself – one of the last true ‘Italian warehousemen’ grocers still left – to the new tasting room and the as yet undeveloped upper floors where the original offices were.

When Richard Urquhart joins us, what I’ve been seeing as a fascinating whisky history takes on a new meaning as the two cousins swap reminiscences. ‘That’s where Stuart pushed a heater onto my leg.’ … ‘This was dad’s office.’ … ‘Remember when we used to press that buzzer?’ … ‘Who worked in here?’

It’s here in these dusty, deserted rooms when it hits home: this isn’t a workplace, but somewhere alive with memory, just as the casks in the warehouse aren’t just whisky, but are a living legacy handed down through generations.

In the warehouse the previous day Stuart had pointed to one of the Mortlachs. ‘Remember the 75-year-old we bottled?’ he’d asked. ‘That was filled by my great-grandfather. My grandfather was 19 at the time. My father decided to leave it for longer and we bottled it. I now have to think what my grandchildren will be bottling.’

Generations pass, in the same way as bottles are emptied, leaving memories, but the house is now being filled again. Things change and evolve, the family endures.